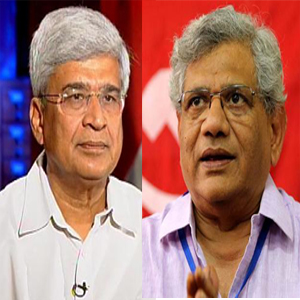 By J. Devika (3 June 2019) – The CPM leadership’s assessment of the UDF victory in the general elections has been largely dismissive. They claim that it is temporary though unexpected; they believe that the position they took on the entry of menstruating women into Sabarimala resulted in a backlash that cost them votes.

They point out that even their supporters chose to vote for the UDF in the hope that a resurgent Congress may take on the BJP more forcefully at the Centre.

I cannot help but think that the CPM leadership is capable of seeing only conservative Malayali Hindus when they think of ‘people’ miffed by them. This is, of course, not the case. Almost every other substantial issue raised against them in the name of the ‘people’ was raised not by the conservative Hindus but by sections of the critical public who, despite all their criticism, do not wish the end of the mainstream Left. That the Left cannot see them even in these trying times is saddening. If the savarna party apparatchiks continue to believe that these voices can all be ignored because there is no alternative, they are mistaken.

I wish to make four observations about the CPM leadership’s inability to see this.

First, did the minorities vote for the UDF because it offered them a semblance of protection, or created such an impression? The latter was surely not evident during the campaign. But then, was the mainstream Left any better? 2017 is not distant — and the echoes of the Hadiya case have not yet died down. In this atrocious violation of an Indian citizen’s fundamental rights, Hadiya Ashokan was stripped of her rights by the judiciary and placed in confinement by her father, aided and abetted by Hindutva elements. Hadiya lived in a panchayat ruled by the LDF; the MLA and MP of the district were from the LDF. All this was to no avail, as the mainstream Left indulged in the most shocking Islamophobic indifference to her plight. The matter dragged on, allowing the most vicious and venomous diatribes to poison public debate.

Yes, many must have expected a Congress victory in the polls. But why is it that they did not feel the presence of the CPM at the Centre was vital to making the Congress stick to a secular line? It is important to recognise that you can’t be Islamophobic in 2017 and then hope to make up for it by trying to hold off ritual-obsessed conservative Hindus in 2018.

Secondly, in those seats in which the Hindutva candidates seemed to have a chance, and in others where the CPM’s candidates were complete disappointments, CPM supporters openly voted for the UDF — there was anger about the CPM candidate selection which the leadership ignored. What most supporters desired was an alliance between all forces that value the Constitution, which could take on the Hindutva assault. Since this was impossible because of pig-headedness on both sides, supporters chose the next best option. Instead of blaming voters, the CPM ought to be less combative and be more open to convivial exchanges between different faiths, and the revival of a strong anti-caste imagination of the Hindu community through Sreenarayana’s thought.

Thirdly, the failings of the CPM leadership’s handling of the Sabarimala controversy have to be acknowledged. There are whispers that the CM’s folly was to listen to the feminists. Now, that is an exaggeration — leave alone the present, there is little in the past that indicates that women are taken seriously by the CPM leadership! At the start of the Hindutva madness over Sabarimala, many feminists had indicated that this was not an issue prioritised by them in Kerala, and that the wise thing would be to cool the growing frenzy by orienting people’s attention to the reality of the devastation left by the August floods, in Sabarimala and in the homes of the most ardent aachaaravaadis. We argued, actually, for restoring the ecology of Sabarimala and pushing the confrontation till the sentiments built up were diffused. However, we were ignored; the feminists who the CPM leadership listened to told them exactly what they wanted to hear. In the end, they lost both the conservatives and the ‘activists’. If only you were ready to acknowledge the limits of your strategy in Hindutva-hegemonised India, you would have created better tactics. This is not to bend to the Hindutva elements; but to defuse the charge they were building up. To see the difference, however, you had to be less macho.

Fourthly, why did the CPM do poorly even in seats where their votes were largely secure? The CPM should learn some hard lessons from this defeat. Indeed, this is the time to look at the fact that the activity of organising is more than getting women to come and stand in a line for the Women’s Wall. It has to do with working with people at the grassroots, and offering them a vision of the future that promises justice and democracy. Not just an anticipation of burgeoning capitalism that promises to save the poor, but no one really knows how.

I do want the CPM to survive in Kerala through these times, I really do. I fully acknowledge its significance in the fight against Hindutva. But unless the CPM leadership stops pretending to be blind, one can only watch it cut down the very branch on which it sits.

The writer is a historian and social critic. This article first appeared in The Indian Express.