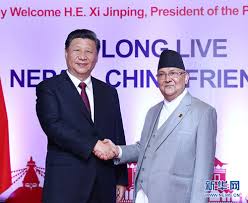 During his tour, Xi met with Nepali President Bidhya Devi Bhandari and Prime Minister K. P. Sharma Oli, among other political figures, and witnessed the signing of 20 bilateral cooperation documents.

The two sides agreed to elevate their ties to a strategic partnership of cooperation featuring ever-lasting friendship for development and prosperity, opening a new chapter of China-Nepal relations.

In welcoming Xi, many Nepali people told Xinhua that China has been supporting them in their country’s social and economic development, and they hope their two countries grow closer.

The Chinese president received a warm welcome in capital Kathmandu, where the national flags of China and Nepal, as well as portraits of Xi and Bhandari, were installed on almost every lamp post along the streets that Xi travelled.

“Nepal and China have a traditional friendship, and we Nepali people here are looking forward to the further enhancing of relations after President Xi’s trip,” said Manzoor, who didn’t give his full name. Manzoor is a scarf retailer with his shop at the Thamel shopping area, one of the most populous shopping spots here.

Sunil Prajapati, mayor of Bhaktapur City in south-central Nepal, said Xi’s visit is expected to put Nepal on the radar for many Chinese and draw more Chinese tourists here. That may inject new vitality into Nepal’s economic development.

Hailing the signing of the cooperation documents, Pushpa Raj Pradhan, editor-in-chief of Nepali weekly People’s Review, said “documents on transportation and trade will have a long-term impact on the economic development of Nepal.”

Pradhan voiced optimism of the trans-Himalayan connectivity network, a gigantic infrastructure program undertaken by the two countries to upgrade roads, railways and aviation in Nepal, and bolster ties.

Mohan Lohani, former Nepali ambassador to Bangladesh, highlighted the importance of the trans-Himalayan connectivity network and said the newly-signed cooperation documents “arose the hope that the two countries would be better connected in the future.”

The planned trans-Himalayan connectivity network would serve as an effective route, through which more Nepali goods could go to China and thus gain access to wider markets in the region, said Yubaraj Sanurra, a revered local policy analyst.

Foreign policy expert Hiranaya Lal Shrestha said, “China’s pledge for infrastructure development across the Himalayas may make the mountains a symbol of friendship instead of a barrier.”

Ahead of Xi’s tour here, Oli told Xinhua that Nepal is committed to strengthening its friendship with China and expanding ties under the Belt and Road Initiative (BRI).

“We are concentrating ourselves on economic development through the BRI and other bilateral projects,” the prime minister said. “China is our largest supporter.”

Oli said Xi’s historic visit has drawn “a new blueprint” for Nepal-China relations and will herald a new era of relations.

“The two countries have always respected each other, supported each other and never interfered in the internal affairs of the other,” he said, “and their traditional friendship is unbreakable.”