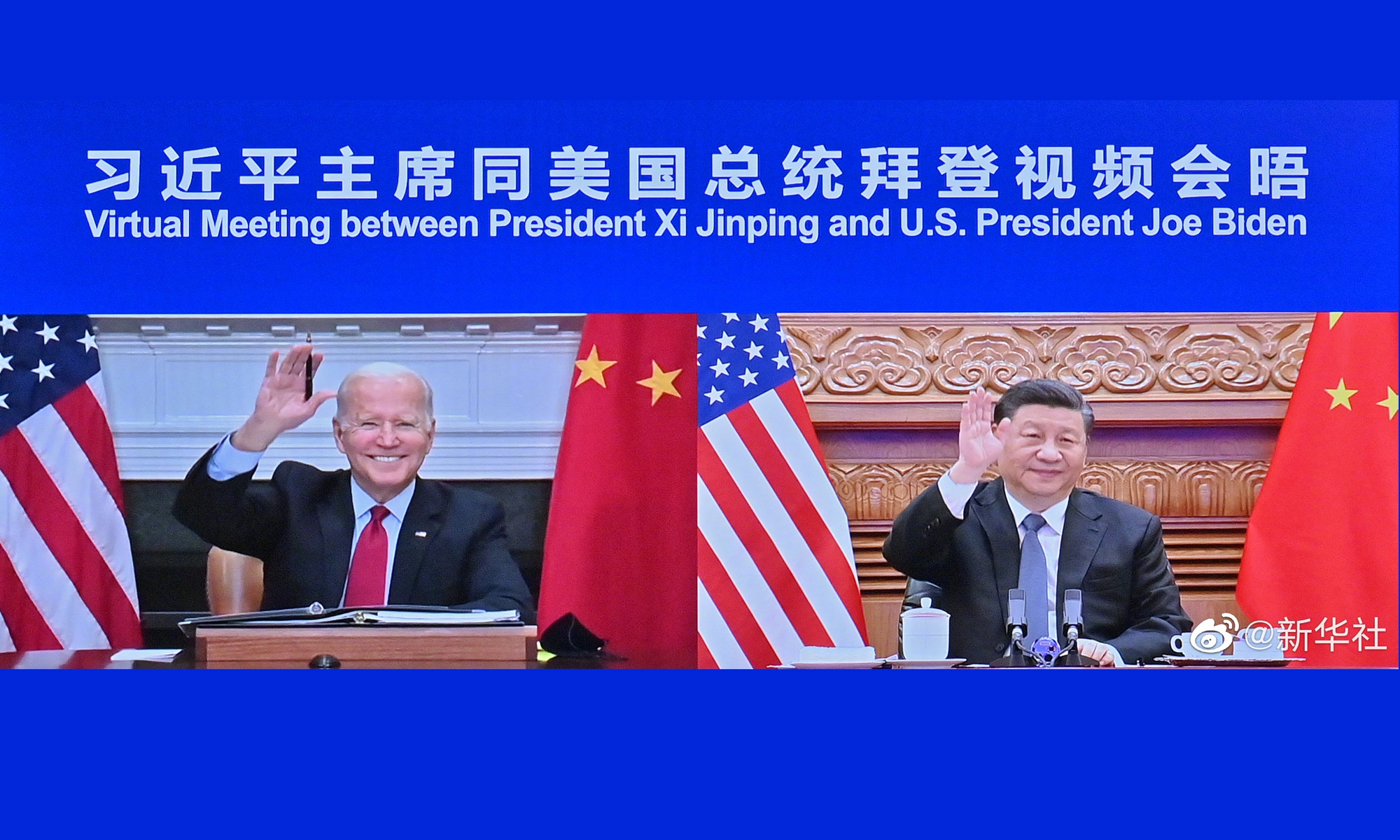 By Chen Qingqing and Liu Xin Global Times, 16 November 2021) –  A rare extended virtual meeting between the top leaders of the world’s two major powers concluded on Tuesday and the leaders agreed on two consensuses in principle such as rejecting a new cold war and reaffirming the importance of China-US relations. During the meeting, which came at the request of the US, Chinese President Xi Jinping laid out three principles and four priorities for growing bilateral ties in the new era, demonstrating Beijing’s high-minded manner and full confidence in pushing Washington to correct mistakes that have led the bilateral relationship to deviate in recent years, experts said.

Although China and the US agreed on principles such as peaceful coexistence and win-win cooperation, experts noted that there has been a palpable distrust toward the Biden administration given its past deeds and flip-flops on China policies, and the future of the most important bilateral relationship depends on how much the US government could turn its promises into action.

Beijing drew up several red lines not only on matters related to sovereignty like the Taiwan question but also those concerning its social system and development path. After the struggles in recent years, China is now trying to push the US to correct and reset its problematic policy toward China, and this is China’s new diplomatic stance “from the position of the strength” and “on a fair and equal basis,” experts said.

Chinese President Xi Jinping had thorough and in-depth communication and exchanges with US President Joe Biden on Tuesday, and the first face-to-face virtual meeting between the two leaders lasted three-and-a-half hours after they opened their talks on a friendly note. It was a highly expected and closely watched interaction after the two leaders spoke twice on the phone, in February and September, since Biden became US President.

“Xi said the only correct direction for the future of China-US ties is that it should be based on mutual respect, peaceful co-existence and win-win cooperation,” Diao Daming, an associate professor at the Renmin University of China in Beijing, told the Global Times on Tuesday.

Although there are divergences and conflicts between the two countries, they could be resolved through dialogue and negotiations in order to keep the relationship away from confrontation, and the three principles laid out by the Chinese President served as an accurate roadmap for a steady development of the relationship in line with the expectations of the world, he said.

In the past few years, China-US relations have been deteriorating in a faster-than-expected pace as some said it had reached their lowest point in decades. From the trade war initiated by former US president Donald Trump against China in 2018 to Washington’s zero-sum mentality by encircling and confronting Beijing on its core interests on matters such as Xinjiang, Hong Kong, and the South China Sea, there have been growing divergences on strategic levels between the two countries.

The recent escalating tension in the Taiwan Straits, which was also triggered by the continuous provocation of US officials, became increasingly dangerous as some observers raised concerns that China-US ties would continue worsening.

They also need to treat each other as equals, keep differences under control, and seek common ground while reserving differences. The other two principles include peaceful coexistence and win-win cooperation. No conflict and confrontation is a line that both sides must hold, the Chinese President said.

China put “mutual respect” ahead of other principles to show it is the premise for the two countries to develop constructive and stable relations, Lü Xiang, director for research of the Chinese Institute of Hong Kong, told the Global Times on Tuesday.

“The three principles and four priorities put forward by the Chinese leader are concrete proposals in the hope of pushing bilateral relations back on the right track,” Lü said.

Since 2018, the US has continuously interfered in China’s domestic affairs such as Hong Kong and Xinjiang matters, and it showed no respect to China and posed malicious confrontations, the expert added. “China rearranged the principles for growing bilateral relationship, which means  reorganizing the content of the new type of major power relations,” he added. However, there were major differences in Chinese and US readouts following the virtual meeting. In a shorter statement from the White House compared to the nearly 4,000-word Chinese statement, Biden recognized the importance of managing strategic risks as well as “the need for common-sense guardrails to ensure that competition does not veer into conflict.” Still, Biden raised so-called concerns about Xinjiang, Tibet and Hong Kong, as well as human rights.

When it came to the Taiwan question, Biden said the US remains committed to the one-China policy, which is guided by the so-called Taiwan Relations Act, the three Joint Communiques, and the Six Assurances, according to the readout.

On the Taiwan question, Xi said we have the patience and will strive for the prospect of peaceful reunification with utmost sincerity and efforts. But if separatist forces for “Taiwan independence” provoke us, force our hand or even cross the red line, we will be compelled to take resolute measures, the Chinese President noted.

From the content of the meeting, experts said China adopted a high-minded stance in focusing on the future of the bilateral relationship, but the US focused on detailed issues to serve its domestic political agenda. With a broader view, China gives high regard to the international order by repeatedly stressing the importance of maintaining a peaceful and stable international environment, but the US only cares to manage relations with its allies, some experts said.

It also showed that China eyes developing China-US relations from a much bigger picture and in the long run, Lü noted. “Unlike the US’ flip-flop policies, China’s policies toward the US are consistent and persistent,” he said.

Given that China-US relations are the most important between major powers in today’s international relations, the virtual summit sent a positive signal to the world that China and the US will cooperate in many areas despite they could not avoid fierce competition.

“China and the US are two giant ships sailing in the ocean. It is important for the two sides to keep a steady hand on the tiller, so that the two giant ships will break waves and forge ahead together, without losing direction or speed, still less colliding with each other,” Xi said.

Despite expectations on cooperation between China and the US in areas such as climate change and fighting COVID-19, experts said China remained vigilant, even showed distrust, given the US’ previous flip-flops on its China policies.

What a statesman does, be it right or wrong, an accomplishment or a failure, will be recorded in history, Xi told Biden. “It is hoped that President Biden will demonstrate political leadership and steer the US’ China policy back on the track of reason and pragmatism,” he said.

To what extent the US can accept China’s proposals remains unclear in the US readout. And given the recent positive signs – for example, the safe return of Huawei’s Meng Wanzhou – they also indicated a clear willingness for further cooperation, but it still depends on how the US would carry them out, Lü said.

Chinese top leader drew up several red lines for the US not only concerning sovereignty-related matters like the Taiwan question, but also on China’s social system and development path, with Biden reiterating that the US does not seek to change China’s system, the revitalization of its alliances is not anti-China, and the US has no intention to have a conflict with China.

From the interactions in Anchorage in March, to Tianjin in China in July and Zurich in October, China gradually has the initiative in the bilateral relations. The era for the US to unilaterally define the bilateral ties has ended and the two countries have entered into a period of equal and fair dialogue, Wang Dong, an expert on China-US relations at Peking University, told the Global Times on Tuesday.

Some experts remain cautiously optimistic on whether the virtual meeting would become a major turning point in China-US relations.

“Though the US readout did not specify which areas the two sides would further cooperate on, there was a softer tone. It could be an important turning point in political terms,” Lü said.