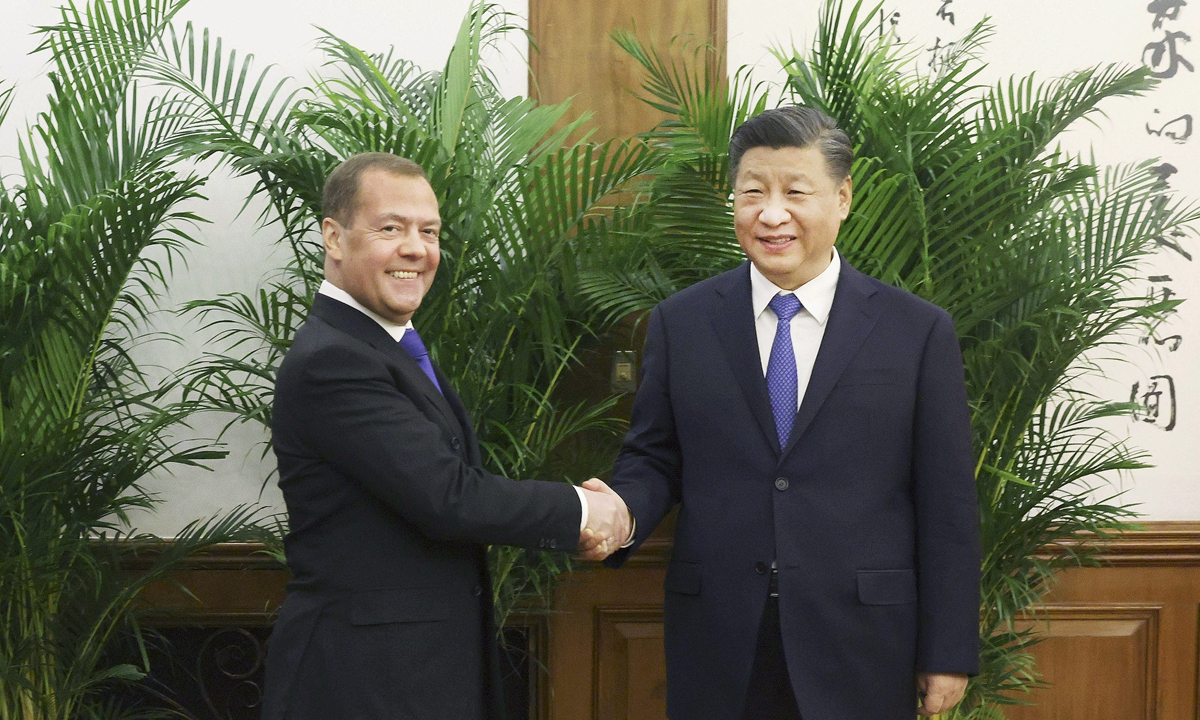 Global Times (22 December 2022) – Chinese President Xi Jinping, also the general secretary of the Communist Party of China (CPC) Central Committee, on Wednesday met with Chairman of the United Russia party Dmitry Medvedev, who visited China at the invitation of the CPC.

The two sides highlighted the high level of China-Russia relations and discussed the Ukraine crisis, with experts expecting the move could promote progress in peace talks.

While requesting Medvedev convey kind regards and best wishes to Russian President Vladimir Putin, Xi said the institutionalized exchanges between the CPC and the United Russia party over the long term have become a unique channel and platform for the two countries to consolidate political mutual trust, promote mutually beneficial cooperation, and demonstrate strategic coordination.

Xi noted that over the past decade, China-Russia relations have withstood the test of international changes and maintained sound, steady and high-level development. He said that developing a China-Russia comprehensive strategic partnership of coordination for a new era is a long-term strategic choice that the two sides have made based on their respective national conditions.

China is ready to work with Russia to push forward China-Russia relations in the new era and make global governance more just and equitable, Xi said.

Medvedev said the cooperation between the United Russia party and the CPC is a vital part of Russia-China relations. He noted that in recent years, relations between the two parties maintained high-level development, and the two sides have conducted extensive exchanges and cooperation.

Medvedev said the United Russia party is willing to implement the consensus reached by the two heads of state, adding it would actively promote bilateral cooperation in the economy, trade, energy and agriculture sectors, jointly resist various external pressures and unfair measures, and promote greater development of a Russia-China comprehensive strategic partnership of coordination.

Regarding the Ukraine crisis, Xi said China decides its position and policy based on the merits of the matter concerned, upholds objectivity and fairness, and actively promotes peace talks.

Medvedev said there are reasons for the Ukraine crisis, and it is very complicated. Russia is willing to solve the problems through peace talks, Xinhua News Agency reported.

The meeting has once again stressed the China-Russia comprehensive strategic partnership of coordination for a new era, which clarifies the misunderstandings of some in the West who suspected an alliance between the two sides, and have in turn used such rhetoric to create confrontation, Wang Yiwei, director of the Institute of International Affairs at the Renmin University of China, told the Global Times on Wednesday.

Greater voices in the international community are calling for peace talks to settle the Ukraine crisis, and they are hoping China would play a greater role in contributing to the cause, experts said.

This meeting, against such a backdrop, could promote more profound and actual progress of peace talks among parties concerned, as Russia itself has also in recent days repeatedly showed willingness to engage in dialogue, Cui Hongjian, director of the Department of European Studies at the China Institute of International Studies, told the Global Times on Wednesday.

“At least Russia can share its true feelings and thoughts on this issue with China. The Xi-Medvedev meeting will see if Russia and Ukraine’s willingness to talk things through can lead to actual progress effectively, and this echoes the common wishes of the international community,” Cui said.

China’s stance on the Ukraine crisis has always been clear and its position is more flexible, as China is not directly involved in the conflict as the West is. What’s more, whether in terms of credibility or capability, the West cannot play the role that China could, Cui noted.

Ten months into the conflict, the West itself is showing greater divergence on the issue with mounting calls for dialogue and coordination, Cui said.

Ukraine is also facing greater pressure from the US and Europe, so if all parties concerned can truly exchange their willingness for talks and agree on a common goal, peace talks are not an impossible thing to achieve, observers said.

On the same day when Xi met with Medvedev, China and Russia launched the Joint Sea 2022 naval drill in the East China Sea, a move naval officers and experts said reflects a high level of strategic mutual trust and will further promote the two navies’ capabilities in jointly dealing with maritime security threats, and will contribute to the safeguarding of peace and stability in the region and around the world.

The drill is carried out based on the annual military cooperation schedule and is not targeted at any third party or related to the current international situation, analysts said.

Having set off from a naval port in Zhoushan, East China’s Zhejiang Province on Tuesday, the Chinese warships arrived at the designated area in the East China Sea at noon on Wednesday to rendezvous with their Russian counterparts, China Central Television (CCTV) reported on Wednesday.

The exercise started with the first phase, the emergency assembly, including maneuvering in formation and communications practice, and will switch to the joint operations phase and eventually the final separation and withdrawal phase next Tuesday.

The drill reflects a high level of strategic mutual trust between the Chinese and Russian militaries, as both sides sent their main combat vessels with advanced equipment, a Chinese military expert who is familiar with China-Russia joint exercises but requested anonymity told the Global Times.

Such a joint naval drill between China and Russia, both permanent members of the UN Security Council, also has significance in safeguarding peace and stability in the region and around the world, the expert said.

The Joint Sea series is the largest series of bilateral joint naval drills between China and Russia, and it has become a vital platform for cooperation between the two militaries since the first round was held in 2012, observers said.

Over the past 10 years, both sides kept deepening their exercise courses, expanding their exercise areas, standardizing their organizational models, coordinating closely and showing a high level of mutual trust, Rear Admiral Wang Yu, the executive director of the Joint Sea 2022 from the Chinese side, said in the CCTV report.