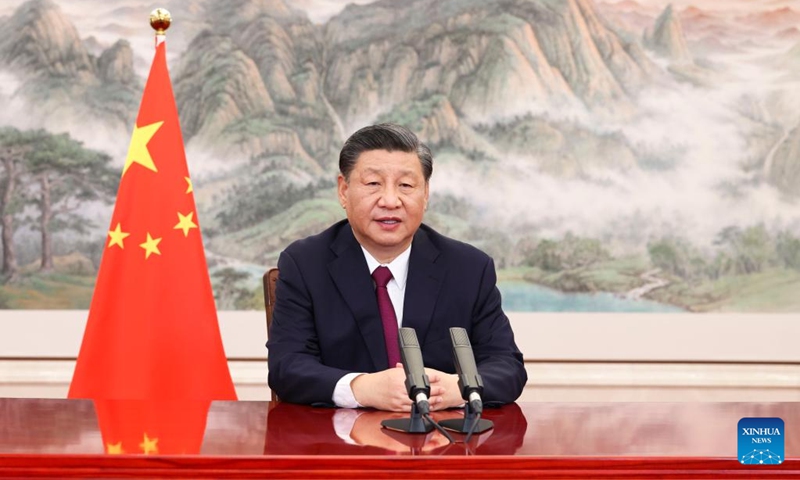 GT (22 April 2022) – Chinese President Xi Jinping proposed a Global Security Initiative which stressed a commitment to the vision of common, comprehensive, cooperative and sustainable security and to reject a Cold War mentality, group politics and bloc confrontation while delivering a keynote speech via video link at the opening ceremony of the Boao Forum for Asia Annual Conference 2022 in South China’s Hainan Province on Thursday.

Analysts said the proposal was necessary and urgent as solidarity, security and development is needed amid rising concerns over the impact on global stability and the economy brought by the Ukraine crisis and attempts to build small cliques to create confrontation. The proposal called on countries to take a comprehensive security concept to avoid the Cold War mentality and also injected confidence in the global economic recovery, analysts said.

Citing an old saying from the “Guanzi” collection of ancient Chinese writings “Stability brings a country prosperity while instability leads a country to poverty,” Xi said in his speech that security is the precondition for development.

“We humanity are living in an indivisible security community. It has been proven time and again that the Cold War mentality would only wreck the global peace framework, that hegemonism and power politics would only endanger world peace, and that bloc confrontation would only exacerbate security challenges in the 21st century,” Xi said.

Xi proposed the Global Security Initiative which stresses to stay committed to the vision of common, comprehensive, cooperative and sustainable security, and work together to maintain world peace and security. It rejects the Cold War mentality, opposes unilateralism, and says no to group politics and bloc confrontation.

The initiative also opposes the pursuit of one’s own security at the cost of others’ security or the wanton use of unilateral sanctions and long-arm jurisdiction, rejects double standards, and stays committed to peacefully resolving differences and disputes between countries through dialogue and consultations, and supports efforts conducive to the peaceful settlement of crises.

Xi’s Global Security Initiative proposal is a timely call for countries to uphold the comprehensive and sustainable security vision at the time when the world is facing unprecedented challenges in terms of the pandemic and geopolitical conflicts, and resonated with many scholars and entrepreneurs at the Boao Forum.

“Countries around the world are like passengers aboard the same ship. Since all countries are now on the same ship, we cannot just take care of our passenger cabins (countries). We must also take care of our ship. Hence, we need to strengthen and not weaken multilateralism, as emphasized by President Xi,” Kishore Mahbubani, Singaporean political scientist and distinguished fellow at the Asia Research Institute, National University of Singapore, who is also a speaker at the forum, told the Global Times.

“Amid the lingering pandemic, international turmoil and lackluster global economic recovery, the keynote by the Chinese president sends a signal of peace and stability, and instills confidence,” Samson Khaou, executive vice president of Asia-Pacific, Dassault Systèmes, told the Global Times on Thursday.

“The Global Security Initiative is a new proposal but its contents are not unfamiliar to us as these are the principles and concepts China has always practiced and proposed on building shared, comprehensive, cooperative and sustainable security,” Guo Yanjun, Director of the Institute of Asian Studies at China Foreign Affairs University in Beijing, told the Global Times.

The great changes to the international situation and order have underscored the link between development and security. The proposal, which closely followed the Global Development Initiative, stresses security as the premise to development – making the two initiatives more logically integrated, Guo said.

While delivering a speech via video at the general debate of the 76th session of the United Nations General Assembly in September 2021, President Xi proposed a Global Development Initiative in steering global development toward a new stage of balanced, coordinated and inclusive growth in the face of severe shocks caused by COVID-19.

The Russia-Ukraine conflict is a reference point for China’s new concept of global security, Alessandro Golombiewski Teixeira, former chief economic advisor to the Brazilian president, told the Global Times on Thursday. “Group politics, as we see from US attempts to round up Russia after the conflict with different platforms of coalitions, is a dangerous approach, because these countries are only looking out for themselves and don’t see the spillover effect of the world economy.”

In this sense, the Chinese President’s call to stop using blocs against countries and the need to respect regional interests, and the idea of treating security as the different side of the same coin of development strikes clear and loud to me,” Teixeira said.

“Countries that are leading, such as China and the US, have a responsibility of not only looking at themselves but also at the global situation. I see China is doing, it is talking, it is explaining that it doesn’t want a conflict and states need to think globally,” Teixeira said.

The world is standing at the crossroads of being pushed into confrontations seen during the Cold War period or walking toward solidarity, Guo said, noting that President Xi’s proposal is urgent and necessary.

The Russia-Ukraine conflict was caused by the Cold War mentality and also a geopolitical game that not only undermines regional security but also affects global stability. The Global Security Initiative aims to jump out of the confrontation to take an overall view on security issues among different countries and regions. It offers the Chinese approach to promoting peace, said Guo.

While China is calling for global solidarity to deal with common challenges, US Deputy Secretary of State Wendy Sherman was in Brussels to participate in a dialogue on China with EU partners on Thursday, which was seen by observers as the US’ latest move to coordinate EU allies to contain China.

Analysts said that the sharp contrast clearly shows who is showing responsibilities and taking the initiatives in promoting global cooperation and who is sowing trouble and inciting confrontations.

During his speech, President Xi also noted that in this day and age, the international community has evolved so much that it has become a sophisticated and integrated apparatus. Acts to remove any single part will cause serious problems to its operation. When that happens, both the victims and the initiators of such acts stand to lose.

“It is particularly important for major countries to lead by example in honoring equality, cooperation, good faith and the rule of law, and act in a way befitting their status,” said Xi.

The Chinese President also called for efforts to ensure Asia as an anchor for world peace, a powerhouse for global growth and a new pacesetter for international cooperation.

Experts at the forum said the global economy is closely interlinked with one another that spillover effects by efforts to isolate countries were bad for everyone, especially as global economic recovery is still weak and policy adjustments by some countries leave many countries with little fiscal and monetary options. Several countries were fighting to be solvent and countries in Africa are already facing direct grain shortages in the wake of the Russia-Ukraine conflict.

In this regard, unswervingly sticking to true multilateralism and global trade remains the way to steer the world out of current difficult situation, experts and delegates attending the Boao Forum said.

Zhang Yuyan, director of the Institute of World Economics and Politics at the Chinese Academy of Social Sciences, told the Global Times that countries should continue to actively forge global supply chains and more specialized labor division will allow all partners to gain from trade.