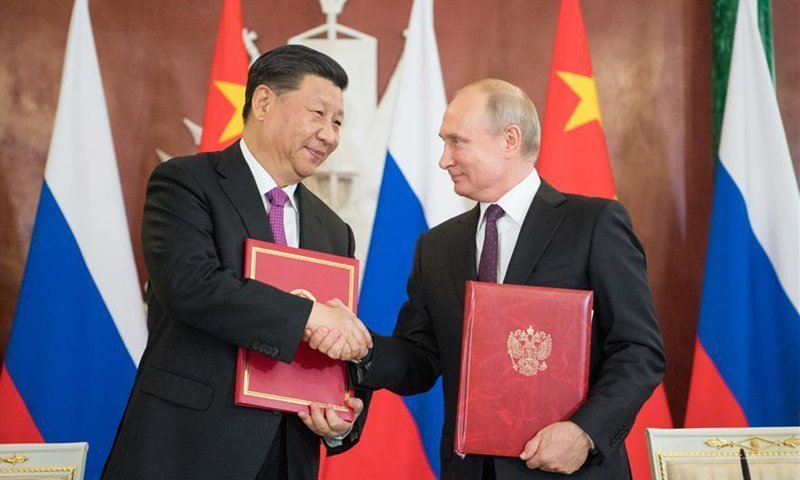 Xi wrapped up a three-day visit to Russia on Friday, during which he also attended the 23rd St. Petersburg International Economic Forum (SPIEF). It is his eighth visit to Russia since 2013 when he was elected Chinese president, which came as the two countries are embracing the 70th anniversary of the establishment of diplomatic ties.

During the trip, the Chinese president attended nearly 20 events in Moscow and St. Petersburg, which has delivered fruitful results, Wang noted.

As the most important political achievement during his visit, Xi and his Russian counterpart Vladimir Putin signed a joint statement on elevating the China-Russia ties to a comprehensive strategic partnership of coordination for a new era.

The ties between China and Russia has become a major-country relationship featuring the highest degree of mutual trust and the highest level of strategic coordination, thus making a key contribution to preserving world peace and stability, said Wang.

According to Wang, leaders of the two countries have agreed to deepen political mutual trust, strengthen strategic communication, intensify mutual support and firmly stick to the strategic direction of advancing bilateral relations.

Both leaders have also agreed to firmly uphold the international system based on international law and with the United Nations at its core, Wang said.

China and Russia have vowed to strengthen contemporary global strategic stability in a joint statement signed by the two heads of state, Wang noted.

Recognizing that the current international security is facing serious challenges, China and Russia are ready to deepen strategic mutual trust and strengthen strategic coordination to firmly safeguard global and regional strategic stability, according to the joint statement.

The fact has proved that China and Russia need to strengthen solidarity and coordination to maintain global strategic stability and the balance of international power, said Wang.

The two sides will continue to dock the Belt and Road Initiative (BRI) and the Eurasian Economic Union, support each other to build the BRI and the initiative to forge a greater Eurasian partnership, in a bid to jointly promote regional integration and regional economic integrated development, he said, adding that both sides will promote two-way trade to reach 200 billion U.S. dollars.

The two sides agreed to hold the China-Russia year of scientific and technological innovation from 2020 to 2021, in a bid to jointly improve their independent research and development capabilities, Wang said.

During his visit, Xi was awarded an honorary doctorate from Russia’s St. Petersburg State University, Putin’s alma mater, which wrote another episode of exchanges between Chinese and Russian heads of state, as well as in the fields of people-to-people exchanges and education, Wang said.

The two heads of state also witnessed the signing of nearly 30 bilateral cooperation documents in a wide range of fields such as economy and trade, energy, science and technology, aerospace, agriculture and education, he said.

During his visit, the Chinese president addressed the plenary session of the SPIEF which is an important platform for the international community to share views on global economic development.

He called for joint efforts in creating an open world economy, people-oriented and inclusive societies, and a beautiful homeland with harmonious coexistence between human and nature, so as to hold the “golden key” of sustainable development to solve global problems.

Xi underlined that China will continue to further opening-up, preserve the multilateral trading system, and carry out trade cooperation on the basis of equality and mutual respect, Wang added.

Xi said that China is willing to share latest scientific achievements, including 5G technology with other countries, promote communication and cooperation in such areas as poverty reduction and social security, and join hands to tackle global climate change and other issues, Wang added.

It is widely held that China has been trying to achieve universal benefits through positive interactions with other countries instead of pursuing selfishness or playing a zero-sum game, said Wang.

This year marks the 70th anniversary of the founding of the People’s Republic of China. Over the past seven decades, the Chinese diplomacy, under the leadership of the the Communist Party of China (CPC), has achieved remarkable success, Wang said.

China will follow the guidance of Xi Jinping Thought on Diplomacy and make unremitting efforts to promote the building of a new type of international relations and a community with a shared future for mankind, and open up new prospects for China’s diplomacy in the new era, so as to make more significant contributions to the great rejuvenation of the Chinese nation as well as peace and development of the world, Wang said.