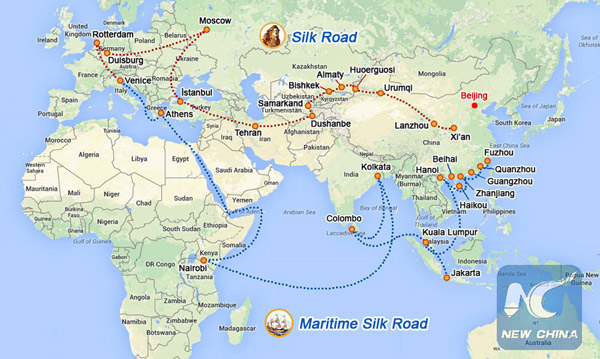 In just over two weeks, it will trek across Germany, Poland, Belarus, Russia and Kazakhstan, before arriving at Wuhan, its final destination in central China. The journey is three times faster than by sea, and the cost is about a fifth of air freight.

The 11,300-km Lyon-Wuhan railway that made it all possible is part of the Belt and Road Initiative proposed by Chinese President Xi Jinping more than three years ago.

The ambitious initiative – linking dozens of countries along a land-based Silk Road Economic Belt and an ocean-going 21st-Century Maritime Silk Road – is a crucial component of Xi’s foreign policy.

Its name takes reference from a historic network of trails and caravan routes that linked the civilizations of Asia, Europe and Africa and transformed the nature of international trade links.

More than 2,000 years ago, China’s imperial envoy Zhang Qian braved a world of uncertainties on a diplomatic mission to Central Asia, setting in motion an economic miracle.

In the centuries that followed, numerous trading posts cropped up along the Silk Road first opened up by Zhang, and an endless stream of goods and materials flowed in both directions. Ideas, technologies, cultures, and religions spread, creating a seamless network that truly connected East and West.

Now, with the world struggling to close a widening development gap while protectionism rearing its ugly head, China hopes to reinvigorate the heritage of these historic routes and transform them into a modern story of inclusive growth and cross-continental cooperation.

In September 2013, on a state visit to Kazakhstan, Xi first suggested that China and Eurasian countries join hands to build a Silk Road Economic Belt.

A month later, the Chinese president proposed in Indonesia to build a close-knit China-ASEAN community and offered guidance on constructing a 21st Century Maritime Silk Road to promote maritime cooperation.

The idea is to combine the rapidly expanding Chinese economy with benefits of all parties involved through an inclusive platform.

“The Belt and Road connects economies in the Asia Pacific and Europe. China and the countries along the Belt and Road will share the benefits of the project such as bolstering the economy, improving people’s livelihood and tackling crisis,” Xi said in November 2014.

Thus far, his grand vision has been backed by concrete action, and the early harvests of the initiative are but a fraction of its potential.

Already, the initiative has had a noticeable effect on trade and investment. In 2016, China’s combined imports and exports with countries along the Belt and Road amounted to some 913 billion U.S. dollars, over a quarter of China’s total trade value that year.

As the benefits of the initiative become more obvious, doubts have begun to abate.

In the first quarter of 2017 alone, Chinese enterprises invested 2.95 billion U.S. dollars in 43 countries along the Belt and Road.

All in all, Chinese businesses have invested more than 60 billion U.S. dollars in Belt and Road countries, and helped build 56 economic and trade cooperation zones, generating nearly 1.1 billion dollars in tax revenue and creating 180,000 local jobs.

With growing recognition of the initiative, misunderstandings have waned.

Belt and Road countries account for about 60 percent of the world’s population and 30 percent of global GDP.

So far, the initiative has won support from more than 100 countries and international organizations, of which over 40 have signed cooperation agreements with China on the Belt and Road Initiative.

The United Nations General Assembly, the UN Security Council, APEC and the Asia-Europe Meeting have all incorporated or reflected Belt and Road cooperation in resolutions and documents.

The establishment of the Silk Road Fund and the Asian Infrastructure Investment Bank (AIIB), which has recruited 70 members around the world, also provided new sources of support for the initiative.

With deepening friendships, hostility has diminished, and with increasing consensus, opposition has receded.

The Belt and Road Initiative is important to China, but it goes far beyond benefiting China alone.

It offers a solution to global economic difficulties and uncertainties worsened by a sluggish recovery, downturns in trade and investment, a lack of growth momentum, and setbacks in globalization.

In Xi’s own words, the Belt and Road Initiative originated in China, but has delivered benefits well beyond its borders.

Against today’s global economic headwinds and rising risks of protectionism, the initiative gives hope that openness, shared development and cooperation will bring down walls and barriers.

The multi-purpose road-rail Padma Bridge, which is being built by a Chinese company, is expected to add 1.5 percent to Bangladeshi GDP when it opens in 2018.

The China-Pakistan Economic Corridor, meanwhile, will build a 3,000-km economic belt made up of roads, railways and energy infrastructure between the port of Gwadar in Pakistan and Kashgar in China’s Xinjiang.

As the helmsman of the world’s second largest economy, Xi’s active involvement in the initiative is indispensable for its success.

The Chinese president speaks on the Belt and Road during almost all of his foreign state visits.

Xi attended the opening ceremony of the Port City Project in Colombo, Sri Lanka in September 2014. At the side of Polish President Andrzej Duda, he also personally greeted the Chinese freight train to Europe in Warsaw in June 2016.

In his latest tete-a-tete with U.S. President Donald Trump at Mar-a-Lago earlier this year, Xi told his U.S. counterpart that China would welcome the United States‘ participation in the Belt and Road Initiative.

As a response, the U.S. government has decided to send a delegation to Beijing for the landmark Belt and Road Forum for International Cooperation scheduled for May 14 and 15.

Beyond trade and infrastructure, China’s long-term goals for the Belt and Road also include policy coordination, financial integration and people-to-people bonds, all of which provide a new vision for the future of humanity.

“The initiative has become the linchpin connecting China’s domestic and global ambitions,” said Zheng Yongnian, director of the East Asian Institute at the National University of Singapore.

The Belt and Road is a strong driver for globalization, and the development-based globalization proposed by China means shared growth of all, Zheng said.

Chinese officials have repeatedly stressed that the Belt and Road is in essence an initiative for international cooperation, which is open to all like-minded countries and regions.

Just last month, Foreign Minister Wang Yi compared it to “a circle of friends” open to all countries that share the same goals, rather than an exclusive club.

With that in mind, the Belt and Road Forum for International Cooperation has been designed to expand consultation, to seek new ways to make joint contributions, and to ensure that the benefits are shared with all. The forum will translate the ambitious blueprint into a solid structure and turn a new page in the Belt and Road Initiative.

To date, 29 foreign heads of state and government leaders have confirmed their attendance at the forum. Other delegates include officials, entrepreneurs, financiers and reporters from over 130 countries, and representatives of key international organizations.

As President Xi put it, the Belt and Road is not a private driveway for a certain party, but a broad avenue on which all can march forward together.